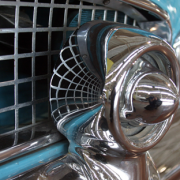 I had earned money picking cherries, tomatoes and cider apples.  I was 16 and had taken Driver Ed from Mr. P.  My boyfriend, who lived two miles away, and I were picked up from home.  Mr. P always complained that we were the slowest to change places.  We had learned where the blind spot was to steal a kiss.

I asked my dad if I could buy a car.  He said I had to have the money for the car and the insurance.  I carried the cash and walked 3 miles to Middleport.  A high school graduate owned the used car place.  He had a car for $800, put plates on it, we had a done deal.  He said I had good looking legs in high school.  My sister told me he said the same thing to her.  Good salesmanship – he sold two cars.

The Auction
Scroll to top