The historian is in the office on Tuesdays and Thursdays from 10:00 AM to 3:00 PM. She is available for after-hour appointments if necessary. The historian maintains a display of historical photos that is changed regularly. Stop in to see what’s currently being shown!

The Village of Middleport is a village located on the historic Erie Barge Canal in Niagara County, New York. We are about equidistant from Buffalo, Niagara Falls, and Rochester. As of the 2010 US Census, the population of the Village is 1,860 residents. The Village’s motto is “A Friendly Community.” When US President Franklin D. Roosevelt stopped in Middleport during a trip on the canal, he commented that Middleport looked like “A friendly community.” We take pride in our Village and hope that when you visit, you find that we live up to our motto. 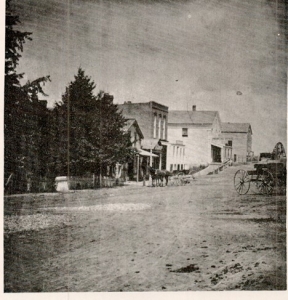 Wooden structures that lined the west side of Main Street ( looking north.)

In the early 1800’s there came a movement west, drawing settlers with a promise of cheap land available through the Holland Land Company which had set up in Batavia. Many came to this area from Vermont along the Great Central Trail, which today is the area of Route 5. They turned north by the Tonawanda Swamp and traveled narrow trails all the way up to what we know today as Ridge Road. Asher Freeman was one of these settlers, and in 1811 he purchased 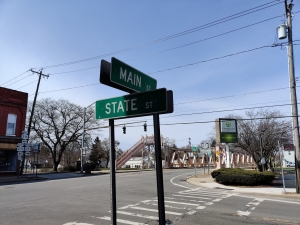 500 acres of land for $2.50 per acre. According to his writings, he built a basswood cabin, put in several hundred bushels of grain on the land and eventually built a mill.

The War of 1812 discouraged some settlers from staying in the area. The summer of 1816 was known as the Black Famine when frost prevented crops from maturing and more settlers decided to head elsewhere. Those that remained settled down in the area which today is Route 31 and Griswold Street.

Middleport went through several name changes, perhaps because of who owned the most land, from Freeman’s Corners, Barlow’s Corners, Taylor’s Corners, and Ewing’s Corners. Tea Pot Hollow and Mudport were also on that list. By 1817 when talk started of the building of the canal, Levi Cole, a tavern owner, was the first businessman to move his establishment to the area where today we have the intersection of State and Main Street.

Other enterprising business men followed though by now the cost of land had gone up to $10 per acre and soon there was a hotel, a lumber yard, a blast furnace, a paper mill, merchants of all sorts and an abundance of saloons that could accommodate the travelers along the canal.

The opening of the canal in 1825 brought new life to Middleport.  Businesses along the waterway served not only the village residents but also the canal workers.  The original canal, which was 4 feet deep and 40 feet wide, needed to be enlarged to handle increased traffic.  By 1860 it had been increased to 7 feet deep and 70 feet wide at about the time that the railroad became a competitor for moving products and people through the state.  After the turn of the century, the canal was once more enlarged to 12 feet deep and 90 feet wide.  It was at that time the village got the lift bridge across the canal which still is in service today.