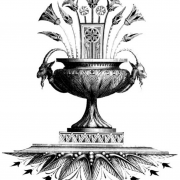 Years ago, a black wreath on the door meant there had been a death in the household.  My mother would send me with some ham and baked goods.  I would also go to the neighbors to collect money.  These were farmer’s wives who would give ten cents from their small grocery money.  One time I was taking food to a nearby family.  I was asked if I wanted to see Pa.  You didn’t say no to an older person in the neighborhood.  Pa was laying on their sofa covered in a nice quilt.  His head rested on a soft pillow.  I thought he was sleeping.  A few years later, a man I knew better also died.  I had waved to him on his porch every day when I came home from school.  Later he had trouble lifting his arm and he had to wear a black patch over one eye.  Mother said I could go to the house funeral.  It was a big house, three room all with sliding doors and many chairs.  His casket was in one of the rooms.  Since I was older and had known him better this funeral bothered me more.   Later, his wife asked if I could clean for her.  I never said anything but I dreaded having to clean the room where the casket had been.  I dusted and used a carpet sweeper (no electric) but tried to do it quickly.  I also picked currants there for 2 cents a quart.

Garbage and Recycling
Scroll to top